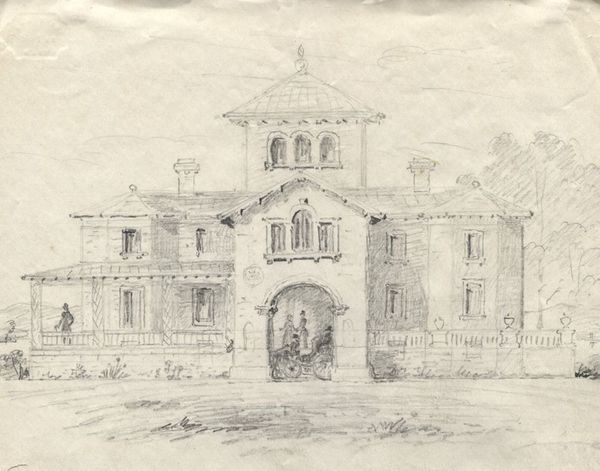 In 1848, Samuel Morse bought the Locust Grove Estate in Poughkeepsie using funds from the fortune he had made from his patented Morse code and telegraph.  This pencil sketch above was created by Morse in 1850 and shows an early plan for the home that now stands at the Locust Grove property. After Samuel Morse died in 1872, his family later sold the estate to Martha and William Young in 1890.  Both were members of influential, affluent families in the city of Poughkeepsie.  William Hopkins Young was a successful attorney and married Martha Innis in 1883.   The Young’s daughter, Annette, established a museum to preserve the estate, together with her parent’s art collections, after her death in 1975.

Martha's mother, Ann Bevier Hasbrouck (1827-1906), was descended from the historic Huguenot families of New Paltz and Martha’s parents were married in 1855 in the formal parlor of Locust Lawn in Gardiner, New York.  George Innis (1822-1903), Martha’s father, had inherited his family’s business.  Innis Dyewoods Company was located at Upper Landing on the Hudson River waterfront, founded in the 1820s by his father Aaron, with partners Nathan Gifford and George Reynolds.  The firm produced natural dyes from exotic trees imported from South America, Africa, and the West Indies.  Until its demise in 1902, the business was very successful. It was forced to close when the traditional natural dye industry gave way to aniline-based synthetic dyes, which will be discussed further in this exhibit. 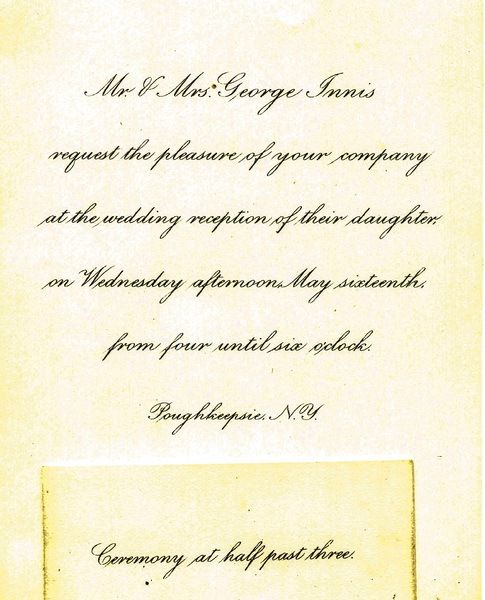 Wedding invitation of Martha Innis for her marriage to William Hopkins Young on May 16, 1883, at the Reformed Church in Poughkeepsie, NY 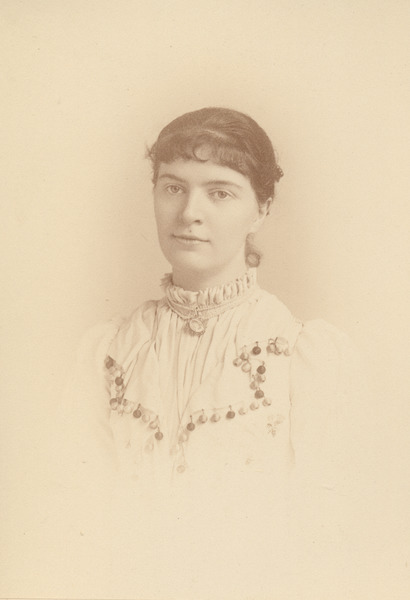 Included in this section is a corset, which was worn with her wedding gown by Martha Innis Young, as well as one of her dresses, worn in 1890.  Living in Poughkeepsie, Martha patronized dressmakers from New York City and clearly enjoyed opportunities to go shopping there herself.  Although they later took a longer honeymoon in Europe, Martha and William spent the week after their May 1883 marriage in New York City.  They stayed at the Hotel Brunswick, with restaurants, theatres, and stores nearby.  One advertisement stated, “All the world comes (here) to shop, to dine, to find amusement”.  On May 19th, Martha wrote to her mother, “I slept like a top last night and feel much better this morning---so I’m going out in a cab to do lots of shopping.”

Locust Grove Historic Estate archives and collections include a multitude of garments and accessories belonging to the Young family and also those of the Hasbrouck family of Locust Lawn, built by Martha Innis Young’s great-great-grandfather.  The historic estate with its mansion, gardens, and 200-acre nature preserve is open to the public.