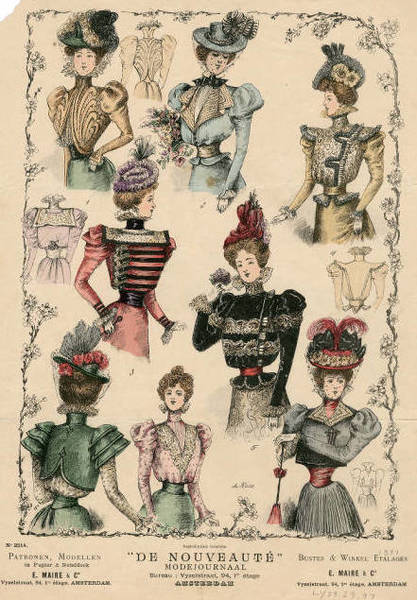 In America, during the later 19th and early 20th centuries, there were three very popular fashion publications: Godey’s Lady’s Book, Peterson’s Magazine and The Delineator, among many others.  Innovations in printing methods, lower paper costs and a rising interest in changing styles and silhouettes led to an increased demand for the publications.  In addition to fashion plates, their content also included fiction, household and etiquette advice and they conveyed information about urban life and values to those living outside of the cities.  In a paper for the Journal of Design History, fashion historian Christopher Breward observed that these magazines “not only encouraged the act of public buying, but engaged the reader in a form of private surrogate shopping”.

Although taken for granted today, the rise of department stores was a new development in the second-half of the 19th century and their advent first made it acceptable for women to be seen shopping for clothing and accessories on their own. In the Northeastern United States many department stores were located in a Manhattan area called “Fashion Row” or “The Ladies’ Mile” (with its echo of Emile Zola’s 1883 novel about a Paris department store, often translated as The Ladies’ Paradise). The shops were located between 15th and 24th Street, from Sixth Avenue to Park Avenue South and the names of many of the stores are still familiar: Lord and Taylor, B. Altman and Company, R.H. Macy, as well as specialty shops such as Tiffany and Co. and Gorham Silver.  Sociologist George Ritzer has called them “Cathedrals of Consumption” and the area was described in an 1893 Handbook of New York City as a “magnificent panorama of mercantile display”, encouraging the popularity of window shopping.

All of these stores offered sales through mail-order purchase and the Tiffany and Co. “Blue Book”, released in 1845, has been credited as the first mail-order catalog in the United States.  Sears Roebuck and Company was founded in Chicago in 1887 as R.W. Sears Watch Company.  Richard Sears, originally a railway station agent, and watchmaker Alvah Roebuck became partners, creating what would eventually become a multimillion-dollar company.  By the late 1890’s their catalog contained more than 500 pages of merchandise and served rural populations throughout the United States, allowing women at all levels of society to purchase fashionable clothing styles.

Since the 1830s clothing patterns had been included in fashion magazines, but the different garment pieces were often laid over each other in a single diagram on one page and it could be very confusing to sort them out.  In 1863 Ebenezer Butterick and his wife developed the first tissue paper patterns, “graded” to produce different sizes, eventually featured in The Delineator magazine.  In her book Fashion for Everyone, Sandra Ley tells of a story that Queen Victoria had sailor suits made for her sons using Butterick patterns.  Generally, the big pattern companies emerged in America.  In 1870 the McCall Pattern Company was established in New York City.  The first paper patterns had no information printed on them, but there were individual pieces for each part of the garment, with perforated holes and notches to communicate sewing information.  These patterns soon allowed women sewing at home access to fashionable styles and silhouettes, using the newly available sewing machines.