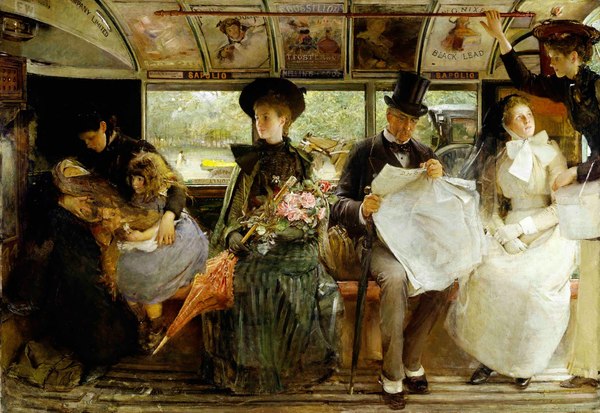 As various shifts occurred which defined the fast-moving pace of fashion during the latter half of the 19th century transitioning into the 20th century, so did similar shifts occur in art. Multiple movements characterized this era. These included Impressionism, Realism, Pre-Raphaelite, Aestheticism, and Art Nouveau to name a few. The image above, contributed by Juliana Bencze, ’21, is an example of one of these many movements and speaks to the verity of just as in fashion, art also desired change as well as opportunities for individual expression.

A movement that shaped the time in history spanning from 1871 through 1914, encompassing art, economic growth, scientific and technological advancements along with a list of cultural innovations was often referred to as the Belle Époque or the Beautiful Era. Although the Belle Époque was most closely associated with the years 1900 to 1914, directly before WWI, it is believed to have begun during the economic turmoil of the 1870s. It then managed to flourish due to the developments of various technological discoveries; however, even still, there remained economic disparities between the classes which also dominated this era. The period was noted for its innovations, including an abundance of exploration in fashion with expeditious changes in the styles of dress that followed. You will see examples of these changes in modes of dress in the ensembles that comprise this section dating from the 1890s to the turn of the 20th century.

There is often a connection that occurs between art and fashion. The garments included here also examine some of the connections that can arise between areas such as art and dress and the ways in which both forms support the growth as well as the advancements of one another. The Aesthetic Dress movement that will be discussed in one of the included object labels is an example of the ties between art and fashion. With its beginning in the 1870s, the movement gained further momentum in the 1880s through the early 1900s and in certain respects, influenced some of the prominent fashions. This style allowed for added mobility to the figure through the use of more comfortable forms of clothing that were often inspired by the silhouettes seen in Pre-Raphaelite art. The playwright Oscar Wilde was an avid supporter of Aesthetic Dress and an advocate for reform in dress. In Alison Gersheim's book “Victorian and Edwardian Fashion: A Photographic Survey,” she states that in 1878, Wilde declared, “the reformation of dress is far more important than the reformation of religion." Whether one agrees with this statement or not, it is hard to dispute the importance of movements such as Aesthetic Dress to the freedom of dress and how it shaped the evolution of fashion during its era and beyond, even to the current day.