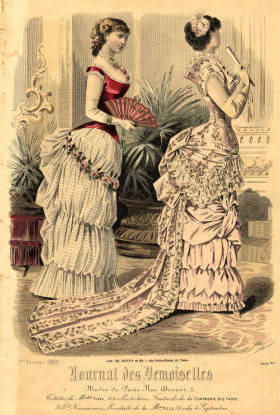 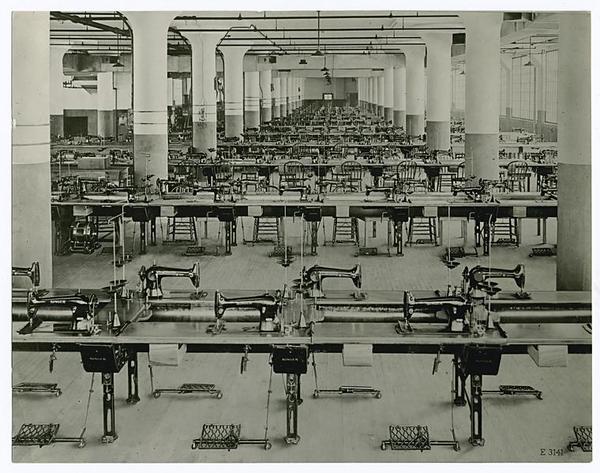 Several innovations in fashion occurred during the second half of the 19th century.  By the time the garments in this exhibition were created, the sewing machine was being widely used, however, hand sewing is still evident, particularly on the inside of the bodices.  For the fashion world, the sewing machine was one of the greatest inventions of the industrial age.  Since the 18th century, several designs for the sewing machine had previously been proposed when, in 1846, the American Elias Howe patented his lock-stitch model.  It wasn't until 1851 when Isaac Singer working in Boston received a patent for the first practical and efficient machine that could be adapted with ease to home use, that sewing machines were more commonly seen and available. They were being widely used by the 1860s, but at first employed primarily for stitching all the straight interior seams; trimmings were still often applied by hand. By 1870 Singer was selling 200,000 sewing machines per year and Godey's Lady's Book, a monthly magazine for women, had praised it as "The Queen of Inventions". Despite its popularity, not everyone embraced the invention. The book Mrs. Godey's Ladies describes a gentleman who wrote to the magazine to say that he would not have one in his home and that, "The best very best sewing-machine a man can have is a wife”!

During the late 1860’s, after the crinoline or hoop silhouette had reached its fullest circumference, a new form developed when the skirt fullness and the design of the structured support beneath the skirt moved toward the back of the body.  Despite distinct changes in silhouette, the bustle style remained fashionable for two decades.  Designed in numerous variations, involving horsehair pads or wire engineered into various shapes, the actual bustle structure which supported the fullness of the skirt drapery was often referred to by the French term tournure .  If not part of the construction of the dress or petticoat, the separate bustle was attached with a waistband. Advertisements in the many women’s magazines popular in the late 19th century extolled the virtues of each individual patented design.  An 1883 issue of Le Mode Illustree advised, “Good taste and much, very much discretion should be used in selecting a tournure, for it must not only suit the dress, but the person wearing it”.

Although the colors of most of the garments in this exhibition are rather sedate, the invention of synthetic aniline dyes in the 1850s had enabled all classes to wear clothing dyed with brighter colors, less expensive to create than those of the natural dyes which had been used throughout previous history.  Aniline dyes were produced using benzene, a toxic product of the tar residue derived from coal used for lighting and heating.  “Perkins purple” was the first popular color, named after the inventor who accidentally discovered the dye when trying to synthesize quinine to cure malaria.  Later called mauve, the color rapidly became so popular for garments of all kinds that Punch magazine compared the phenomenon to the spread of measles.  An article in 1859 commented in a tongue-in-cheek manner, “Other learned men…including Dr. Punch, are disposed rather to view it as a kind of epidemic…”.  Another chemical dye that became popular was a jewel-like tone called “emerald green”, made using arsenic as an ingredient.  Because of the toxic chemicals used in their creation, dyes could cause different levels of poisoning, including skin eruptions, respiratory illness, and sometimes even death.  Women often wore layers of corsets, camisoles, and petticoats which protected their skin, so it was actually the garment workers who were most affected.  Later in the century, these colors were seen less frequently worn by the upper classes.  In her book Fashion Victims, Alison David Matthews states that elite women “spurned saturated…colours on both aesthetic and medical grounds”.