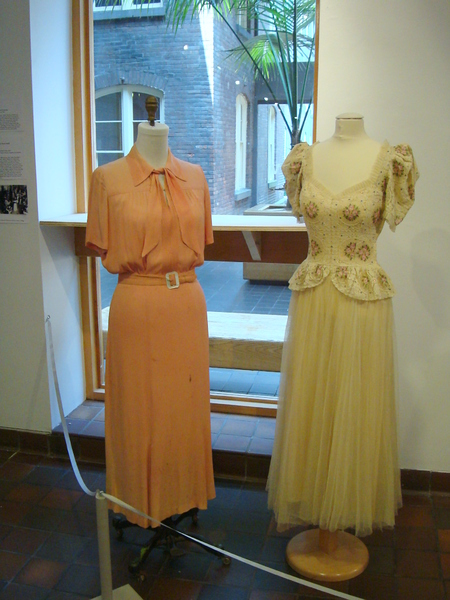 The 1930’s were a difficult time for Vassar. Many services were cut, and scholarship students elected to live in “self-help” dorms, where they saved money by doing the housework themselves. It was also a time when many Vassar women realized they could use their social status and their education to fix a broken society. They participated in protests or did volunteer work in the summer. But the 1930s was also the Golden Age of Hollywood. Thousands of women wanted to imitate the onscreen glamour. At Vassar, girls wore their evening gowns to social events both on campus and at frequent weekend visits to men’s colleges.

The two dresses in this exhibit that represent this period in Vassar’s history also represent students’ hopes and aspirations. The 1935 Class Day dress, donated by Sarah S. Graham ’35, is a perfect example of the simple, practical, and timeless styles that were prized for daywear. The Class of ’35 all wore a dress like this to mark the end of their time at Vassar, showing their family and friends that they were determined to live modestly and intelligently. The ivory evening gown, donated by Frankie Davis ’39, exhibits a Vassar woman’s desire to shine at social events by wearing elegant and fiercely individual dresses. As Frankie Davis wrote in an alumnae survey, “Most [people] hope to leave the world a little better than we entered it. Most [people] believe there is great dignity in the individual and in hard work. This [is] what we learned at Vassar.”